Pomeranians are one of the smallest dog breeds, and are extremely lively and devoted dogs. They are highly intelligent, eager to learn, and love to work. Poms are a happy and relatively friendly breed, but they are known to be temperamental at times.

The Pomeranian has a natural bold and willful nature. They have an attitude that is much larger than their size and are very independent. Pomeranians make excellent companions, and are the perfect addition to any family when trained properly.

Pomeranians first appeared in the once Prussian region of Pomerania, which is now recognized as Germany and Poland. They are the descendents of ancient sled dogs from Lapland and Iceland known as the Spitz breed. At first Poms were larger in size and were used to herd sheep. They were later bred to a smaller size in Pomerania, which is also where the breed received their name.

Pomeranians didn’t become a popular breed until one dog was brought to England in 1888 and was presented as a gift to Queen Victoria. Due to the Queen’s popularity, it wasn’t long before owning a Pomeranian was considered high fashion among the court.

With their popularity well established in England, Pomeranians were brought to America during the early 20 th century, and quickly became a hit. However, the dogs that were held with such esteem in England and America during this time, did not look like the Poms so many dog owners have come to know and love today. Pomeranians of the past had less puffy coats, larger ears and bones, and weighed just under 6 pounds.

Aside from having a history of being cute, fashionable dogs with plenty of personality, Pomeranians have also been used for other purposes than simply as a gift to the Queen. For instance, Poms are celebrated for their intelligence and hard work. They were, and still are often used for:

Currently, Pomeranians are still one of the most popular toy breeds today.

Like many of the Toy breeds, Pomeranians have plenty of energy and are not afraid to use it. They are not the type of dog to laze around, and enjoy staying active whenever they can. Therefore, regardless of where you live, Poms will find ways to get the exercise they need, as they are extremely active indoors. Thus, even if you live in an apartment, or are unable to provide the dog with plenty of outside exercise, the dog will not suffer from this. That being said, you should still make it an effort to take your Pom outside whenever you can, as he does enjoy long walks.

The Pomeranian is one of the smallest dog breeds in the world. He stands 8 – 11 inches at the shoulder, and weighs only 3 – 7 pounds. His physical characteristics make him susceptible to injury. For this reason, it is important that children are taught how to properly play with the dog, and that everyone in the family is conscious of where the dog is at all times, as he can be easily stepped or sat on.

Furthermore, although Pomeranians don’t mind children, they are tempermental and can easily become overwhelmed if very young children pay them too much attention. This attention may make the dog nervous and cause him to become snappy.

Aside from children, Poms are known to get along well with other pets, especially their fellow canines. However, should a Pom feel threatened by a larger dog, they won’t think twice about attacking and defending themselves or their owner, as they are not aware of their own size. Therefore, it’s your job to keep your Pom out of danger and trouble. This can easily be done through proper training, which will give you the right control over the dog.

Speaking of training, the Pom is a quick learner. That being said, it is imperative that the Pomeranian is taught that their owner is boss. If you let a Pomeranian walk all over you, he’ll no longer listen to you, and become extremely possessive and demanding of you. In addition, a Pomeranian should also be well socialized, or he could become suspicious or show aggression towards strangers.

Pomeranians love to bark, which makes them excellent watchdogs. On the other hand, if you let the barking get out of control, it won’t be long before the barking wears your patience.

Poms have a long double coat that requires frequent brushing (every day). They do shed their undercoat twice a year, so expect tufts of fur scattered around your home during shedding season. The coat should be given a dry shampoo only when it is needed.

Pomeranians live an average of 12 – 16 years. They are prone to heart, skin, knee and eye problems. They are also prone to early tooth loss which is common among many of the Toy breeds. They should be fed dry food to help keep their teeth and gums healthy.

Pomeranians are ideal for first time dog owners, as they are easy to care for, and easy to love. Just remember you need to make sure the Pom knows who’s boss, and be constantly conscious of his presence. 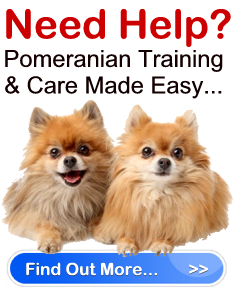